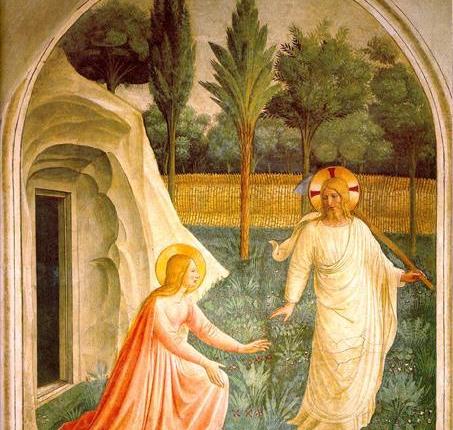 Part of the way through the Easter Vigil Mass I realized something I had subconsciously believed even as I intellectually knew it wasn’t true. I realized that COVID-19 wasn’t confined to Lent. The absence of public Masses wasn’t just a wild Lenten penance. It was a reality that was going to endure for who-knows-how-long. In the midst of a time of penance and sacrifice, it was somewhat understandable to accept and embrace this unasked for restriction. Yet in the time of Easter joy, how did one continue to embrace this cross, even while gesturing toward the empty tomb?

Intellectually, I was fully aware that this was an enduring thing. Yet after passing into the Easter season, I have been pondering this odd cross-section of joy and sacrifice. Of course, it is possible to be joyful in the midst of sacrifice. Love, nearly by definition, involves sacrificing ourselves for the good of the beloved. Yet long, protracted sacrifice in the middle of a liturgical season set aside for rejoicing, feasting, and innumerable alleluias being uttered? How does one do that?

I don’t exactly know, but I am trying.

It helps that I try to often remind my students that we are in the Easter season and should do something special to celebrate this time. At times, I find myself recording videos for them and thinking I need to do this, too.

It has surprised me how I can sometimes enter into prayer when I am praying “remotely.” Like when Pope Francis had some time of adoration during the Urbi et Orbi blessing a few weeks ago. Sitting on my couch in front of my computer and adoring Jesus in Rome seemed kind of silly. Yet as I prayed alone yet communally, I found that I was able to enter into prayer. It wasn’t a perfect scenario, but it worked in that moment. This was a moment of joy, to find myself with Jesus even as I was separated from His Eucharistic presence.

So here we are, fully into the Easter season, steadily working our way through the Easter Octave, filled with joy and yet still experiencing sacrifice. But I guess that makes it a bit like that first Easter Sunday when St. Mary Magdalene encountered Christ at the tomb. In her desire to keep him near, we see Jesus saying to not hold onto Him. Wasn’t this miraculous triumph over death the fullness of joy?

END_OF_DOCUMENT_TOKEN_TO_BE_REPLACED

Is John the most arrogant of all the disciples?

Throughout the Gospel of John, essentially whenever John refers to himself, he doesn’t use his name. Instead, he says “the disciple whom Jesus loved.” At first glance, it might seem like pure arrogance, pride over the fact that John was one of the “inner three” Jesus drew particularly close to Himself.

When I discuss this title with my students, they are a bit surprised that John refers to himself as the beloved disciple. But then I try to draw their attention to the other claims John could have made.

What do we see instead? John, the one whom Jesus loved.

There are several unique roles that John played, but when writing the account of Jesus, he chooses to simply be known by the fact that Jesus loved him. More than everything else, the love of Jesus is the most precious to John. He is the beloved disciple.

Contrary to what we might think initially, his belovedness is not in conflict with anyone else’s belovedness. It isn’t John, the one Jesus loved more than all others or to the exclusion of all others. It is simply: John, beloved by Jesus.

It is a title we could all claim.

Is that what I see first, though: my belovedness?

END_OF_DOCUMENT_TOKEN_TO_BE_REPLACED

“Who is a missionary?” I asked my class, not too long ago.

They came up with a variety of answers: someone who preaches in a foreign country, someone who has very little, someone who doesn’t make money, and the list continued.

It was difficult for them to wrap it all up neatly. Several wanted to insist that you had to leave the country. I think it was because it fit their idea of a missionary better. Flying to a foreign country steeped in poverty seems far more missionary-esque than serving on a college campus.

“FOCUS sends people to college campus and calls them missionaries. Are they?”
“Do they get paid?”
“They fundraise their salary.”

Many were on board with that. But for them, there had to be some type of leaving happening–going to a new place, even if they would begrudgingly accept work in the United States.

The whole issue of pay came up again, some saying that would disqualify me from missionary status.

Am I a missionary?

END_OF_DOCUMENT_TOKEN_TO_BE_REPLACED

I have a friend who once said that some things are cliché because they are true.  Phrases that seem trite and overused are sometimes the best way to say what we want to say.  They have become clichés because they express a truth like nothing else really can.

At times, I fight against what it seems a lot of people like or consider to be the best.  But sometimes, it is because it is actually good that so many people rave about specific things.  On Facebook, I’ve seen quite a few people talking about how much they loved the show “This Is Us.”  With the school year wrapped up, I decided to give it a try.

I don’t think a show has ever pulled at my heart as much as this one has.

I love how they portray the complexity of the human heart.  In this show, families are messy, imperfect, and crucial to our own identity.  As the show unfolds, perfect facades crumble to reveal that everyone is striving to get through life doing the best they can and making numerous mistakes along the way.  It is very human, which makes it simultaneously beautiful and frustrating.  Though the families can be chaotic, a theme interwoven in the show is the importance of family.  Whether they are blood relations or adopted family, the experiences we have in our homes shape how we interact with the rest of the world.

In a world that seems to insist that families can be replaced with technology or friend groups, it is refreshing to see families upheld as the place where we grow, change, and become who we are.  Imperfect families, with parents fighting their own struggles and children feeling their own unique pains, are the places that shape us and show us how to love.  “This Is Us” doesn’t claim that all families are perfect or should be perfect.  I would say they are simply claiming that the role of family is irreplaceable.   END_OF_DOCUMENT_TOKEN_TO_BE_REPLACED

When Jesus appeared to His Apostles after the Resurrection, His hands, feet, and side still bore the marks of the crucifixion.  His glorious, death-conquering body held the holes that won salvation.  To be certain, His body was different than it was before.  He was strangely appearing and disappearing, passing into locked rooms, and yet still able to eat and be touched.  Dying and rising had changed His body.  Gone was the appearance scarred beyond human recognition.  However, His body still showed where nails and a spear had pierced Him through.  Why was that?

There are several theological reasons, but I would like to focus on one minor, personal reason.  I would argue that Christ kept His wounds to destroy our image of perfection.  Here is the conquering King, the One who has fought death and won and yet–He still shows signs of this arduous battle.  As the commander of this battalion, as the King who leads His people into battle, Christ is not unaware of the price of this fight.  Our whole lives seem to be a battle towards Heaven.  Christ doesn’t need perfect looking soldiers; He simply needs faithful ones.

The burden of perfection is one we place upon ourselves.  We want lives that are neat and tidy, yet none of us have it.  Sometimes we brand others as perfect, but that is only because we see portions of their lives and not the whole of it.  And when we expect this perfection from them, we encourage them to fake it instead of living authentically.

Often, when I tell people that my two older sisters are religious sisters, I can see them mentally placing my family in a certain type of box.  Years ago, I gave my witness in preparation for a summer of catechizing youth, and one of the critiques I received was that teens probably couldn’t relate to my story.  While I understood what they meant, I couldn’t help but take it a bit personally.  My story of an aching heart being separated from my sisters was not something they deemed relatable.  Since then, I have discovered that it is something to which others can relate.  Perhaps they don’t have siblings in religious life, but many have experienced anger and frustration with God and a plan you never wanted for your life. END_OF_DOCUMENT_TOKEN_TO_BE_REPLACED

I was a little surprised at this statement, coming from my five year old nephew.  We had just started the drive from my house to my parents’ house.  Perhaps it was the fact that we were passing a Catholic church or maybe the thought just came into his mind, but the statement seemed like it was out of left field.

“Who told you that?”  Even though my mind was immediately jumping to Nietzsche’s famous ‘God is dead’ statement, I was pretty certain my nephew had a different source.  Did he have a little atheist friend at school?  Did his teacher say something?  Was an older student filling his mind with such things?

“My mom and dad.”  Well, that changed it a bit.
“What did they say?”
“They said that He died.  He really died.”
“And that He rose from the dead?”
“Yeah.”  That detail didn’t seem quite as important to him.

Yet the Resurrection of Jesus is one of the most important details of all.  If He was who He said He was, then the Resurrection verifies His claims.  If not, then there could be no greater blasphemy than claiming to be God and, by all rights, the Jewish leaders were correct to condemn Him to death.

The incredible aspect of the Resurrection is sometimes lost on those of us who have spent our whole lives hearing about it.  But if we take a step back, we might be able to appreciate more fully the bold claim we are making.

We claim the Incarnation is true, that God took on human flesh–He didn’t just appear to be human or was merely human–and dwelt among us.

Later, He was condemned to death, scourged, crucified, and then died.  After wrapping His body in clothes, He was laid in a tomb, which was sealed with a large stone and had a Roman guard stationed in front of it.

Three days later, the tomb is empty, the guards are confused, and His body is nowhere to be found.

We claim that He rose from the dead.  He actually died and then He resurrected.  Not “came to” or was revived, but entered into a new life, one that could never end again in death. END_OF_DOCUMENT_TOKEN_TO_BE_REPLACED