I know sacraments aren’t a contest, but how many have you participated in or witnessed in a one week time period?

After I go to confession within the next couple days, I will be at five sacraments.  Five out of the seven sacraments of the Catholic Church.  That is a record for me, although I can’t tell you what the previous record actually was.

Last Friday, I went to ordinations for six priests for my diocese.  On Saturday, I attended the wedding of a couple friends.  Yesterday, I became a godmother for the youngest daughter of a couple with whom I am friends.  Interwoven over this week were several Masses and soon I will go to confession to bring the grand total of sacraments to five this week.

One of the beautiful aspects of the sacraments is how tangible they are for us physical creatures.  As I stood behind the mother at the baptism, I watched the priest sign the child with an aromatic cross of chrism.  She was claimed for Christ in a physical way so as to show the spiritual reality.  The water poured over her head, reveals the spiritual cleansing that is taking place even though we cannot see it happen.  Long after the scent of chrism has vanished, her soul will still be marked with an indelible seal, proclaiming her as a new creation in Christ.

At ordinations, I watched the bishop trace the hands of the men with chrism, consecrating their hands and lives to the eternal High Priest.  Beyond the chrism, there was the laying on of hands by the bishop and all their brother priests.  Placing their folded hands within the bishop’s hands, they promise obedience to the bishop and to his successors.  Called to conform their lives to the cross, they prostrate themselves before the altar of the Lord, the place where they will daily offer up the sacrifices of the People of God and make present the sacrifice of Jesus.

At the wedding, the couple held hands and spoke aloud the intentions of their hearts.  They made promises in front of witnesses who would pray that they would daily live out these promises.  As a silent testament to these vows, they exchanged rings.  The husband gave his wife a ring to always remind her of his faithfulness and love.  The wife did the same for her husband. 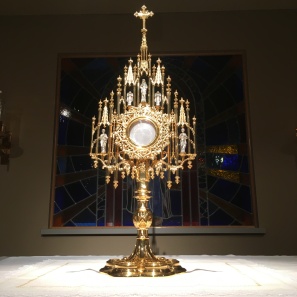 In the Mass, we do not receive the Lord in a simply spiritual way, as beautiful as that would be.  Rather, Christ knows our desire to encounter Him physically and so He comes to us in a way we can attempt to understand.  Bread and wine appear to be offered but their substance is the God-man.  At Reconciliation, we speak our failings and then hear from the lips of the priest in persona Christi that we are forgiven and the stain of sin removed.  At the end of both of these sacraments, we are sent out to the world to live lives that bear witness to the graces we have encountered.

The sacraments invite us more deeply into the life of the Trinity and use physical means to convey spiritual realities.  Jesus touched the people He healed, He walked with His disciples from village to village, He spoke words of forgiveness and consolation, and He broke bread and shared meals with various groups of people.  Many of these same things He continues through His Bride in tangible ways that remind us of His presence and His enduring humanity.  Not simply a nice idea, He is a person to be encountered and He calls us to do so using both body and soul.