“What do your parents do?”
“My dad is a retired firefighter and now drives people at a retirement home.  My mom stayed home with us when we were young and now works as a receptionist at a clinic.”
“Hmm.  I thought it would be something different…I thought your dad would be a politician or something.”
“Nope.  My dad is pretty ordinary.”

Some of the people at the table laugh and one says that the next time he sees my dad, he will tell him that I said he is ordinary.

“What did they do to teach the faith?  Did you go to daily Mass?”
“No.  We prayed the rosary sometimes and usually prayers at night.  My parents just talked about the faith very openly and we always went to Mass on Sunday.  My parents are pretty ordinary.  They just did what they were supposed to: they were our primary educators in the faith.“

It isn’t an uncommon question for people to ask, though.  My two older sisters are religious sisters and it is understandable that people would wonder how that happened.  Young women entering religious life isn’t the most expected thing nowadays (although it is becoming more common) and to have two from the same family seems a bit too St. Therese of Lisieux family-esque.

As a teacher at a Catholic high school, I fully understand that what my parents did is not common.  But I do think it is ordinary in the sense that the laity are to live the universal call to holiness in their ordinary, everyday lives.  Parents are called to be the primary educators of their children in the faith–even before the school or parish.

“Thus the little domestic Church, like the greater Church, needs to be constantly and intensely evangelized: hence its duty regarding permanent education in the faith…the family, like the Church, ought to be a place where the Gospel is transmitted and from which the Gospel radiates…the future of evangelization depends in great part on the Church of the home.”  Familiaris Consortio

Part of what makes my job as a high school Theology teacher so difficult is that most parents are not embracing their role as head of their own domestic church.  If the faith is not lived well at home, then it is a significant battle to teach it elsewhere.  Catholic schools and parishes cannot be the sole instruction for the faith.  It lacks the depth and necessary lived reality of the Catholic faith that can be found when the faith is embraced in the home.  Schools and parishes are meant to be supports for the parents, but they cannot substitute the role of the family in forming their children.

My parents are not trained theologians who read to us nightly from St. Thomas Aquinas or lead deeply philosophical discussions at the supper table.  The ways the faith was modeled at home are completely attainable by other families if only they have the desire to make the faith a core facet of their familial life and not simply a Sunday tangent, if even that.  My mom and dad are not perfect people, but they did take their job seriously to be our primary educators in the faith.  While my siblings and I attended our parish’s religious education program, I rarely learned anything new.  My parish didn’t have a particularly strong program, but I think that points to my parents doing their job and doing it well.

Pope St. John Paul II said that his father make his home as a youth his first seminary.  Both of St. Therese of Lisieux’s parents are now canonized saints, testifying to the importance of holiness within marriage.  St. Gianna’s confessor prompted her to consider marriage as a vocation when he asked her, “If all good Catholic girls went into the convent, then where would we get our Christian mothers?”  Families are crucial to the formation of the Church since it is from them that vocations to the priesthood and religious life flow.  Since that is what happened in my family, I wanted to list a few aspects of family life that I believe contributed to my family being the way it is today. 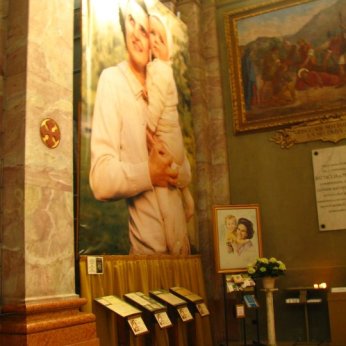 St. Gianna and one of her children, Magenta, Italy

My parents always brought us to Sunday Mass.  Sometimes it was the Vigil Mass if my dad was working a Sunday, but usually it was Sunday morning Mass.  We nearly always went together and it was understood that it was a necessity.  When we traveled, we would either research ahead of time churches and Mass times or we would ask the front desk about local Catholic parishes.  If I stayed at a friend’s house, I would still need to go to Mass.  If we stayed up late on Saturday night, we still needed to go to Mass.

This would have meant little if our faith remained simply on Sunday.  My parents openly talked about the faith at home.  I thought this was common practice, but sometimes my students will say that faith is never spoken of at home or that their parents leave them to believe whatever they want.  I grew up hearing my parents’ discussions about politics, which were rooted in their religious convictions.  As a child, we would often gather in the living room to pray evening prayers.  When I was in middle school, we started praying an annual Marian Consecration.  The faith was spoken of and lived at home beyond Sunday morning.

Most evenings would find us gathered around the supper table.  My mom is a wonderful cook and most of our meals growing up were homemade and enjoyed as a family.  This does not mean that meals were always perfectly enjoyable, squabbles and fights still broke out, but we were drawn together for food and conversation each evening.  Some nights meals were quick, with one sibling headed off to one school event or another.  Others were long and drawn out, celebrating a birthday or anniversary.  Over meals, we talked.  I think it is at least partially because of this practice that I never felt disconnected from my parents.  During high school I sometimes felt they didn’t understand me, but I was usually in conversation with them, hearing about their days and telling them about mine.  This was something I assumed happened in every household, so I was surprised when a friend in early high school told me that her family rarely ate together.  My mom made it a priority for us to be around the table together, even if my dad was at the fire station that night.

My parents practiced NFP.  Natural Family Planning.  No, it isn’t “Catholic contraception.”  It is more of a life-giving practice.  I didn’t always know the ins and outs of NFP (and I still don’t), but my mom was a vocal and persistent proponent of it.  My existence is probably due to their willingness to be open to life, even when it is not financially savvy.  Raising five children on essentially one budget is not easy.  There were many sacrifices that went in to providing for a family considered “large” by many people’s estimations.  NFP was just one of those ways my parents sacrificed to embrace Catholic teachings and be open to life.  My mom stayed home with us until we were ready for school and I believe that being raised by my mom, instead of someone else, helped my family be what it is today.

My parents prayed for our vocations.  While they never knew that it would lead to having two daughters in religious life, my parents were open to what God would ask of us.  Religious vocations in the family is not as easy as it would seem.  Of course, it is joy-filled, but there are many challenges and difficulties that come along with such a vocation.  Families with professed religious are not perfect families by any means and it doesn’t mean that every sibling in the family will follow that vocation.  Religious life, priesthood, consecrated life, marriage: whatever the vocation, the role of parents is to encourage their children to pursue the calling that God has placed upon their hearts.  Sometimes this means the blessing of grandchildren.  Sometimes this means the blessing of a person dedicating their life to prayer.  My parents prayed for our vocations and accepted the sacrifices that went along with such prayer.

I am certain that my parents did other things that influenced my family in our formation, but these are the main facets.  And while people are usually surprised by the fact that both of my older sisters are in religious life, I feel compelled to remind them that married life is the vocation from which the others flow.  The call to holiness is placed in the heart of each person, regardless of their specific vocation.  Of course, marriage is a natural vocation and the call to religious life is a supernatural vocation, but each of them is necessary for the Church to be what she is today.  The family, the domestic church, wields such a power of influence, if only parents could see it.  What a gift it would be if parents took to heart their role to be the primary educators of their children in the faith, instead of hoping that the job would be fulfilled by someone else.  Living in the world but not being of the world, the family and the lay faithful can be a witness of Christ in a world that desperately needs it.

The lay faithful, in fact, are called by God so that they, led by the spirit of the Gospel, might contribute to the sanctification of the world, as from within like leaven, by fulfilling their own particular duties. Thus, especially in this way of life, resplendent in faith, hope and charity they manifest Christ to others.    (St. John Paul II, Christifideles Laici)